CARSON CITY, Nev. (AP) — A 20-year-old immigrant from El Salvadoran accused of killing four people in Nevada will be tried on four murder counts in Reno before he faces related burglary and other charges in Carson City, prosecutors in the two counties said Friday.

As part of the plan, Martinez-Guzman and his public defender agreed to postpone a preliminary hearing that had been scheduled Friday in Carson City on burglary and other counts involving items belonging to some of the victims.

He will be extradited to Reno and held without bail while awaiting trial on the murder counts. He has not entered pleas to any of the charges.

Federal immigration officials say Martinez-Guzman entered the U.S. illegally but they haven’t disclosed when or where.

The case has drawn the attention of President Donald Trump, who tweeted shortly after the arrest of Martinez-Guzman that the killings showed the need for his proposed U.S.-Mexico border wall.

Martinez-Guzman told investigators that he stole jewelry, a .22-caliber revolver and other property from a Reno couple less than two weeks before prosecutors say he fatally shot them with the gun on Jan. 16 at their home.

He is also charged in the killing of two other women a week earlier at their homes 45 miles (72 kilometers) away in rural Gardnerville.

Carson City District Attorney Jason Woodbury said the agreement to prosecute the murder charges first was “unusual but not unprecedented.”

“Generally, the jurisdiction that catches a defendant proceeds with its prosecution first,” Woodbury said.

But “when we have a way to make the process a little easier on people victimized by a crime, and when those people tell us they want the murder case to go first, we absolutely listen and do our best to honor those wishes,” he said.

Prosecutors say Martinez-Guzman acknowledged killing the Davids and that his DNA was found on the revolver also used to kill Connie Koontz and Sophia Renken.

Trump invited the Davids’ daughter, Debra Bissel, granddaughter and great granddaughter to attend his State of the Union address as his guest, and introduced them during the speech in the U.S. House chambers.

“Just three weeks ago Debra’s parents Gerald and Sharon were burglarized and shot to death in their Reno, Nevada, home by an illegal alien,” Trump said. “No one should ever have to suffer the horrible heartache they have had to endure.” 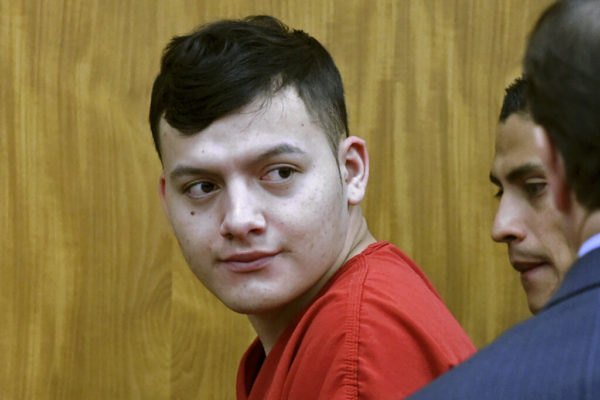