JEFFERSON CITY, Mo. (AP) — Missouri Gov. Eric Greitens calls it an “entirely consensual relationship.” But the woman with whom he has acknowledged having an affair says Greitens spanked, slapped, grabbed and shoved her during a series of sexual encounters that at times left her crying and afraid. Missouri Gov. Eric Greitens speaks at a news conference about allegations related to his extramarital affair with his hairdresser, in Jefferson City, Mo., Wednesday, April 11, 2018. Greitens initiated a physically aggressive unwanted sexual encounter with his hairdresser and threatened to distribute a partially nude photo of her if she spoke about it, according to testimony from the woman released Wednesday by a House investigatory committee. (J.B. Forbes/St. Louis Post-Dispatch via AP)

The woman’s graphic testimony was revealed in a report released Wednesday by a special Missouri legislative committee that now is expanding its mission to recommend whether lawmakers should begin impeachment proceedings to try to remove the Republican governor from office.

But Greitens is vowing to remain in office and prove his innocence against mounting allegations that he denounced as “lies and falsehoods.”

Greitens, 44, is to go to trial May 14 in St. Louis on a felony indictment of invasion of privacy for allegedly taking and transmitting a nonconsensual photo of the woman while she was partially nude. Separately, the special House committee is to recommend after the legislative session ends May 18 whether to pursue impeachment. Legislative leaders said they will call themselves into a special session.

The legislative report released was signed by all five Republicans and two Democrats on the committee. It describes the woman’s testimony as credible and notes that Greitens has so far declined to testify or provide documents to the panel.

The woman told the committee Greitens took a photo of her after manipulating her into a compromising position during an unwanted sexual encounter in his home and told her “everyone will know what a little whore you are” if she told anyone about him.

Greitens has refused to directly answer media questions about whether he took the photo, but he has steadfastly denied any criminal wrongdoing.

“This is a political witch hunt,” Greitens told reporters Wednesday, invoking one of President Donald Trump’s favored criticisms of unwanted investigations. He later added: “This is exactly like what’s happening with the witch hunts in Washington, D.C.”

Republican House Speaker Todd Richardson called the woman’s testimony “beyond disturbing” and defended the integrity of the investigation. He said: “Let me be very clear about this: This is not a witch hunt, and the committee had no political agenda.”

If the House were to impeach Greitens, the Senate then would choose seven jurists to conduct a trial on whether Greitens should be ousted. The impeachment process can occur independently of a criminal case.

According to the report, the woman testified that she met Greitens in 2013 as a customer of her hair salon. She said she had a crush on Greitens but was shocked when he ran his hand up her leg and touched her crotch without her consent during a March 2015 hair appointment. He later invited her to his St. Louis home while his wife was out of town.

After she arrived through the back door, the report said that the woman testified Greitens searched her purse and “patted her down from head-to-toe.” He then asked if she had exercised and had her change into a white T-shirt with a slit on the top and pajama pants.

“I thought, oh, this is going to be some sort of sexy workout,” the woman testified.

But once in his basement, Greitens taped her hands to pull-up rings, blindfolded her, started kissing her, ripped open the shirt and pulled down her pants, the woman testified. She didn’t give consent to be disrobed or kissed, the report said. The woman testified that she then heard a click, like of a cellphone picture, and saw a flash.

The woman testified that Greitens told her: “Don’t even mention my name to anybody at all, because if you do, I’m going to take these pictures, and I’m going to put them everywhere I can. They are going to be everywhere, and then everyone will know what a little whore you are.”

When she remained silent, the woman said Greitens “spanked me and said, ‘Are you going to mention my name?’ And I said, I just gritted through my teeth, and I said, ‘No.’ And he’s like, ‘Good, now that’s a good girl.'”

“I was definitely fearful,” the woman testified to the legislative committee.

After telling Greitens, “I don’t want this,” the woman testified that Greitens unbound her hands. She said she started “uncontrollably crying.” She said Greitens then grabbed her in a hug and laid her down. She said he put his penis near her face and she gave him oral sex. Asked by the committee whether the oral sex was coerced, she responded: “Coerced, maybe. I felt as though that would allow me to leave.”

The woman testified that she confronted him later that day about the photo and he responded: “You have to understand, I’m running for office, and people will get me, and I have to have some sort of thing to protect myself.” Then she said Greitens added: “I felt bad, so I erased it.”

The House committee report said it doesn’t possess any physical or electronic evidence of the photo. Prosecutors in his criminal case previously acknowledged that they don’t have the photo, though they could be trying to obtain it.

The woman’s name never has been officially released; it is redacted from the legislative documents and she is identified only by her initials in court filings. Her attorney has repeatedly sought anonymity on her behalf.

The woman testified to the committee that she had several additional sexual encounters with Greitens, including one in June 2015 when “he slapped me across my face” after she acknowledged having slept with her husband. She said she “felt like he was trying to claim me.”

In another subsequent sexual encounter, the woman testified that Greitens “out of nowhere just, like kind of smacked me and grabbed me and shoved me down on the ground, and I instantly just started bawling.”

It “actually hurt, and I know that I actually was really scared and sad when that happened,” she testified.

The woman’s account contradicts statements Greitens made previously. Asked in a January interview with The Associated Press if he had ever slapped the woman, Greitens responded: “Absolutely not.”

Greitens said in a statement Wednesday night: “This was an entirely consensual relationship, and any allegation of violence or sexual assault is false.”

Greitens, a Rhodes Scholar and former Navy SEAL officer who was once considered a rising GOP star, first acknowledged having an extramarital affair on Jan. 10, when St. Louis TV station KMOV ran a story revealing that the woman’s ex-husband had released a secret audio recording of a 2015 conversation in which she told him about the photo Greitens took at his home.

The woman testified to the House committee that her husband had said: “I’m going to ruin this guy.”

Greitens on Wednesday criticized the House report as “one-sided tabloid, trash gossip that was produced in a secret room.”

He also referenced a comment the woman made during a lengthy deposition in his criminal case when she was asked if she saw what she believed to be a phone. A court filing from Greitens’ attorneys quoted her as saying, “I haven’t talked about it because I don’t know if it’s because I’m remembering it through a dream or I — I’m not sure, but yes, I feel like I saw it after that happened.”

Greitens and his defense team have seized on the “dream” comment to attack the credibility of her testimony. But the prosecutor in the case says the defense “cherry picked bits and pieces” of her nine-hour deposition and the woman’s attorney says the comment referred to one particular instance concerning the photo.

In addition to the legislative investigation and the criminal case, Hawley is investigating The Mission Continues, the veterans charity founded by Greitens, as it relates to the state’s consumer protection and charitable registration and reporting laws. That probe came after media reports that Greitens’ campaign had obtained and used a charity donor list in 2015 as it ramped up fundraising for his gubernatorial bid.

By DAVID A. LIEB and SUMMER BALLENTINE 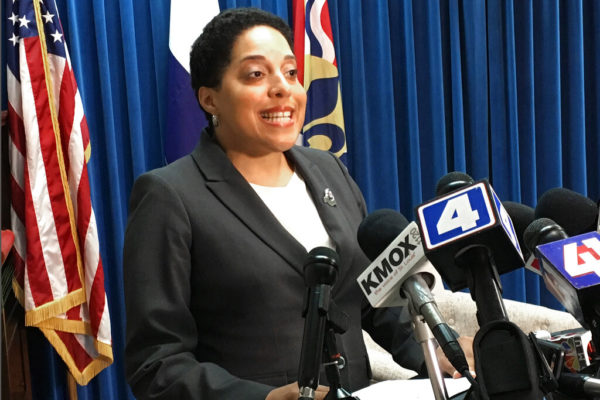