Mississippi man accused of killing 8 tears up during trial Defendant Willie Cory Godbolt, left, cries as he listens to testimony from Shayla Edwards Wednesday, Feb. 19, 2020, on Day 5 of the capital murder trial of Godbolt at the Pike County Courthouse in Magnolia, Miss. A witness testified Tuesday that Godbolt, on trial in the 2017 shooting deaths of eight people, showed up at her house the night of the killings and that he was carrying two rifles and told her that he had killed a sheriff’s deputy. (Donna Campbell/The Daily Leader via AP, Pool)

MAGNOLIA, Miss. (AP) — Testimony from a woman whose son and nephew were killed in a shooting rampage that claimed eight lives in a small Mississippi community was so emotional that the defendant ended up in tears.

Willie Cory Godbolt is a man with a long history of abusive behavior, according to his relatives who have taken the stand against him. He’s pleaded not guilty to charges that could carry the death penalty. When his 12-year-old daughter testified this week, he stared her down.

But according to the Daily Leader, Godbolt was brought to tears on Wednesday when Shayla Edwards testified, recalling how only days before the rampage, Godbolt had coached her son on how to breathe better while running through the neighborhood.

“Mama, I learned how to breathe when you’re running,” Edwards said Austin excitedly told her.

Then she described how days later, she held her 11-year-old son’s lifeless body to her chest and kissed him, rocking him and begging him to wake up. She became emotional when shown the crime scene photos of her sister Tiffany Blackwell’s living room, where Austin and Blackwell’s 18-year-old son Jordan were shot to death.

The defendant shook his head, his face wet with tears, while she talked about how Godbolt had been a part of their lives for decades, the Daily Leader reported.

Blackwell followed her sister on the stand, recounting how Godbolt’s ex-wife, now Sheena May, called her for help. By then, Lincoln County Sheriff’s deputy William Durr had been shot to death, along with May’s mother Barbara Mitchell, her sister Toccara May and her aunt Brenda May. Ferral and Sheila Burrage, a married couple, were fatally shot at a third location.

Godbolt, 37, has pleaded not guilty to four counts of capital murder, four counts of murder, one count of attempted murder, two counts of kidnapping and one count of armed robbery. Godbolt has remained in custody since his arrest on May 28, 2017, hours after the shootings that Memorial Day weekend.

The killings began after Godbolt entered his in-laws’ home in Bogue Chitto and got into an argument with his estranged wife and her family over the couple’s two children, a witness testified earlier in the trial.

Godbolt’s attorney Katherine Poor told the jurors earlier in the trial that her client was trying to protect his family when he “just snapped.” 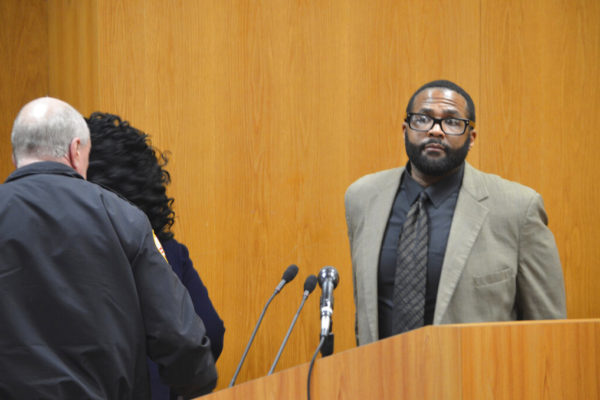