OAKLAND, Calif. (AP) — Relatives of people killed in a 2016 California warehouse fire say others besides the two men who agreed to plea deals are responsible for their losses. Attorneys Tyler Smith, right, and Curtis Briggs, representing Max Harris, speak to reporters at a courthouse in Oakland, Calif., Tuesday, July 3, 2018. Two defendants, Harris and Derick Almena, each pleaded no contest Tuesday to 36 counts of involuntary manslaughter in a fire at an illegally converted California warehouse that occurred during an unpermitted concert. (AP Photo/Jeff Chiu)

They are suing the city of Oakland, the building’s owner and Pacific Gas & Electric Co., alleging issues related to inspections and maintenance.

Derick Almena and Max Harris each pleaded no contest Tuesday to 36 counts of involuntary manslaughter in connection with the December 2016 fire at the illegally converted Oakland warehouse dubbed the Ghost Ship.

Prosecutors say Almena rented the warehouse and illegally converted it into a residence and entertainment venue. Almena hired Harris to help collect rent and schedule concerts.

Bureau of Alcohol, Tobacco and Firearm investigators said they were unable to determine a cause of the blaze.

In court Tuesday, the judge read the name of each victim aloud at an emotional hearing, bringing tears from loved ones in the Oakland courtroom.

Prosecutors say the two defendants turned the warehouse into a “death trap” by cluttering it with highly flammable knick knacks and blocking the few exits in the poorly lit building.

Under terms of a plea agreement, Almena could be sentenced to nine years in prison and Harris could face a six-year term when a judge sentences them next month.

The men could have faced life in prison if convicted at a trial. Now, with good behavior, they are only expected to serve half their sentences after spending a year in jail.

David Gregory, whose 20-year-old daughter, Michela Gregory, was among the victims, said hearing the defendants say no contest was “some small sense of justice” but he was dissatisfied with the outcome.

Parents and lawyers allege in the lawsuits that the Oakland Fire Department failed to inspect the warehouse annually as required. The lawsuit says inspectors would have discovered the illegal conversions.

Warehouse owner Chor Ng, who has never been charged, did not return a phone message Tuesday.

The lawsuits claim PG&E failed to properly monitor, inspect and repair electrical equipment that provided power to the warehouse.

PG&E said in a statement that it cooperated with the investigation and that a review of its record found no electrical problems at the warehouse in the 10 years before the fire. 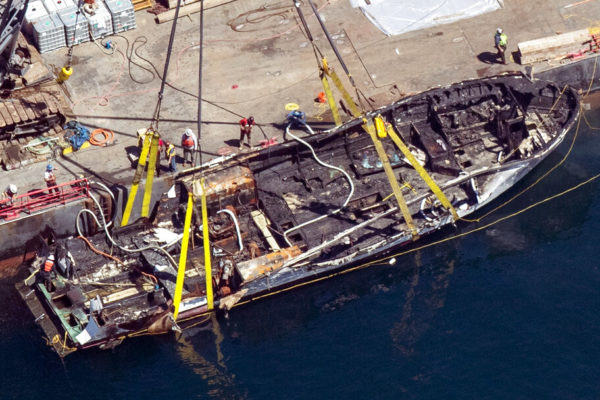