A look at prosecutors who will decide on marijuana crackdown

Attorney General Jeff Sessions has put the top federal prosecutors in states with recreational marijuana back in charge of deciding whether to press pot cases there. Here’s a look at those U.S. attorneys, how they came to their jobs and their background: FILE – In this July 27, 2017 file photo, Bryan Schroder, then acting U.S. Attorney for Alaska, addresses reporters in Anchorage, Alaska. U.S. Attorney General Jeff Sessions has put the top federal prosecutors in states that have legalized recreational marijuana back in charge of deciding whether to press pot cases there, but huge obstacles remain, starting with the fact that many of those U.S. attorneys are either brand new to the job or Obama-era holdovers. It’s was unclear how Alaska’s new U.S. attorney, Schroder, will handle marijuana in the Republican state with Libertarian leanings. Schroder said in a statement that one of his office’s key principals is to follow federal law enforcement priorities, both at the national and local levels. (AP Photo/Mark Thiessen, File)

Appointment: Nominated by President Donald Trump in July and confirmed by the Senate in November.

Background: Schroder has worked for the U.S. attorney’s office for more than 12 years, prosecuting cases involving violent crime, drugs, tax evasion, environmental crimes and other offenses. He served 24 years in the Coast Guard, retiring with the rank of captain.

It’s unclear how he will handle marijuana in a Republican state with libertarian leanings. Schroder said in a statement that one of his office’s key principals is to follow federal law enforcement priorities.

CALIFORNIA, EASTERN DISTRICT BASED IN SACRAMENTO

Appointment: Nominated by Trump in November and awaiting Senate confirmation.

Background: Scott is a California native from the heart of the state’s marijuana-growing region and grew up to become a career state and federal prosecutor. He previously served as U.S. attorney for the district under President George W. Bush and targeted large-scale illegal marijuana operations.

When he left the office in 2008, Scott told the Sacramento Bee that “there must be a wall between the political operation of the White House and the Justice Department.” His spokeswoman, Lauren Horwood, said Thursday that any violations of federal law on marijuana will be evaluated “in accordance with our district’s federal law enforcement priorities and resources.”

Background: Like many of the interim U.S. attorneys, the man tapped to head the massive region that includes Los Angeles was named to the post the day before the change in pot policy. Hanna, a criminal defense lawyer at a private firm, worked as a federal prosecutor in Los Angeles and San Diego between 1990 and 1998, when the war on drugs was in full swing.

Background: U.S. attorney Brian Stretch’s spokesman announced Thursday that Stretch would be leaving the post, a decision that allows Sessions to appoint an interim U.S. attorney. Stretch said Friday that Sessions’ announcement was not the reason for his decision to step down.

Marijuana advocates have criticized Stretch for continuing prosecutions started by his predecessor against a medical marijuana dispensary. The 9th Circuit Court of Appeals eventually ruled that the Department of Justice could not use its money to prevent states that allow medical marijuana from implementing those laws.

Background: Braverman has been a federal prosecutor since 2008 and focused on large international drug trafficking cartels. One prosecution led to the indictments of more than 125 people linked to the Sinaloa Cartel.

After being sworn in, Braverman said he particularly wanted to pursue “those crimes committed by transnational criminal organizations.” In a statement Thursday, he said his office will evaluate violations of federal drug laws “in accordance with our district’s federal law enforcement priorities.”

Background: Troyer spent years in private practice before joining the Colorado U.S. attorney’s criminal division to work on drug and violent crime cases. He left the office to return to private practice but re-joined it under former U.S. Attorney John Walsh, an Obama appointee. Since taking over the top job, Troyer has focused on preventing and prosecuting violent crime, particularly in the state’s poorest communities, and the ongoing opioid crisis.

Appointment: Nominated by Trump in July and confirmed by the Senate in October.

Background: Frank said he is still evaluating how the Justice Department’s move might affect Maine. He said his office is inclined to follow established principles in prosecuting federal crimes, including those that involve drugs.

Frank has spoken out against legalized marijuana in the past. He wrote in The Forecaster newspaper in 2013 that when “there is a conflict between state and federal law, federal law prevails.” He also wrote that “society can only tolerate a certain number of intoxicated people on its streets and highways, at school, at work and at play.”

Appointment: Nominated by Trump in September to become the U.S. attorney for Massachusetts and confirmed by the Senate in December.

Background: Lelling previously served in the Justice Department’s civil rights division and was a prosecutor in the U.S. attorney’s offices in Massachusetts and the Eastern District of Virginia. In a statement Thursday, Lelling said his office would pursue serious federal crimes involving marijuana, but his statement did not address the state’s recreational marijuana law or indicate a stance on commercial marijuana businesses.

Appointment: Named this week at least temporarily as the top federal prosecutor in Nevada. She was one of 17 interim U.S. attorneys appointed by Sessions in districts from Guam to Manhattan. Each temporary appointee can serve 120 days before Trump must nominate a permanent U.S. attorney and seek Senate confirmation.

Background: Elieson was an assistant U.S. attorney in Texas until her appointment, handling cases on fraud, money laundering and terrorism over 15 years. She previously worked as an assistant district attorney for Dallas and Denton counties in Texas.

Background: Williams worked in the U.S. attorney’s office for about 15 years before taking the top job, including stints as the head of the criminal division and violent crimes unit. He previously worked as a deputy district attorney in Multnomah County, prosecuting violent crimes and narcotics trafficking cases.

In an interview last year, Williams complained that marijuana was being illegally exported to states where it’s not legal. He invited representatives from the state to explain what was being done to curtail marijuana “diversion.” The state officials told him the state’s regulated marijuana market, in which pot is tracked from seed to store, was stamping out smuggling. They also described enhanced enforcement efforts.

In the interview, Williams insisted there was insufficient enforcement to prevent diversion and urged state officials to cooperate with his team of drug prosecutors.

WASHINGTON, EASTERN DISTRICT BASED IN SPOKANE

Background: Harrington became a federal prosecutor in 1990 and has led the office’s criminal division and also worked on terrorism and health care cases. His prosecutions include a white supremacist who planted a remotely controlled explosive device along the route of a Martin Luther King, Jr. Day march in Spokane.

WASHINGTON, WESTERN DISTRICT BASED IN SEATTLE

Background: Hayes said Sessions’ move reiterated that local federal prosecutors are in the best position to address public safety. She said previously that her office had investigated marijuana cases involving organized crime, violent threats and financial crimes. Her office would continue to “focus on those who pose the greatest safety risk to the people and communities we serve.”

Appointment: Nominated by Trump in June and confirmed by the Senate in September.

Background: Liu previously served as deputy general counsel for the Treasury Department. She also worked in private practice and was an assistant U.S. attorney from 2002 to 2006 in the office she now leads. She also worked for the Department of Justice, including in divisions focused on national security and civil rights.

Washington has a unique system. Recreational marijuana is legal but cannot be bought and sold. Instead, a thriving industry has developed that exploits a “gifting” loophole, letting retailers “gift” marijuana products when customers purchase items like a T-shirt or coffee mug. 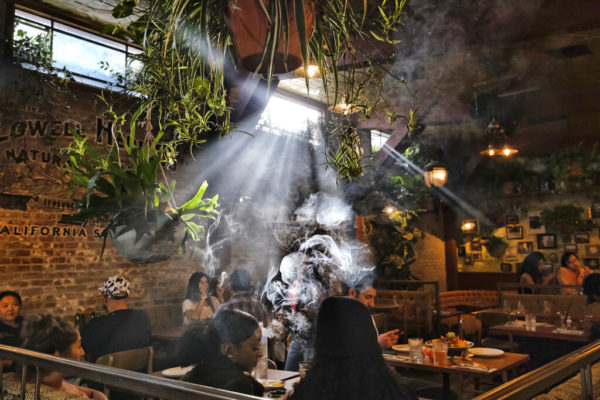